Heard of Mark Driscoll? He’s got himself a mega-church somewhere down south 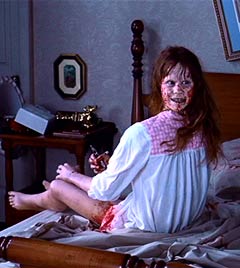 (of me). Among his other charming interpretations of the bible, he believes that women shouldn’t be allowed to hold leadership roles in any church. He probably likes the idea of banishing us to red rooms during our periods too – but I digress.

Mark recently explained the whole Satan/demonic training/hell connection of yoga to his flock during the Q&A part of their Sunday service.

Q&A, the Catholic in me giggles, consists of the flock submitting queries via their cellphones or iPads, no doubt, and Mark reading them off a screen on stage.

A stage? I’ve attended an evangelical worship thingy here and there and still can’t wrap my mind around the theatre aspect of it.

Someone asked if it was okay for Christians to do yoga.

Christianity’s apparent incompatibility with an asana practice has been much in the news lately. Personally, I believe that if yoga’s spiritual center bothers a person, he/she should do Pilates or something, but knowing that most people bring so little of themselves to their personal religions anyway – I don’t think many people are in danger of being seduced away by yoga.

Mark, like most uber-religious, totally over-estimates the average yoga student’s interest in anything other than having a yoga butt and being able to touch their toes. My students tolerate the “namaste” at the end simply out of respect for me.  I am not converting anyone to my way of thinking about the “oneness” of the universe as he puts it.

It’s interesting that he can explain the purpose of yoga and still not get it at all.

No one’s head spins round in yoga though I have witnessed some painful looking displays of near freakish flexibility and if getting in touch with yourself and by extension – everything and everyone – is evil, more of us should choose the “path of darkness”. The world would be a better place if we focused more on it and the people around us rather than wasting our energy chasing a capricious God and his conditional love.

Yoga is good for the body and one’s emotional well-being. Research backs me on both counts.

What people like Driscoll worry about is that the exposure to other ways of interpreting the world will lessen their power as people begin to question and think for themselves.

If Christianity is the be-all/end-all than people will come to that conclusion without the Driscoll’s guidance. No one leaves a faith based on their fitness choices. People who have faith aren’t swayed by a little inward reflection and perhaps are even strengthened by the opportunity.

Ultimately what we call “religion” arose from a need to explain and impose a sense of order on life. What actually guides the universe is not so simplistic which is evidenced by the fact that there are so many creeds competing for dominance.

Yoga is the last thing Driscoll should be worrying about or wasting his words on. Real life in America, riddled with real problems, would be a better focus, but what’s a dogma without tangible demons, eh?

One thought on “Yoga Makes Flexible Demons for Satan”

The Constitution Is Not A "Secular" Bible