I’m betting that Sylvia Brown kicked herself a good one when iTunes started hawking its latest app, a virtual Ouija board.

Satan at one’s fingertips, say some, but with so many of us related to the dead, 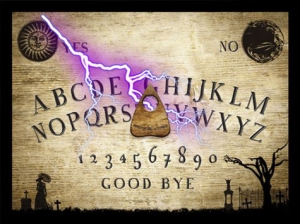 turning our cellphones into a conduit to the other-side is an improvement over giving us a brain tumor and simply sending us there in person.

Touch screens being a fit made in … the beyond … the Ouija app is a must-have for anyone whose ever stored a loved one’s last voice message. No word on if the two can be interfaced.

The Ouija has a gruesome reputation thanks to Hollywood though Christianity besmirched it first, but whether one believes that the departed can be contacted or not, this app has a creepy feel.

I don’t have a phone that does anything other than be a phone, so I can’t speak to the appeal or use of apps in general, but I can’t imagine why anyone would spend actual money on an app that could potentially unleash poltergeists into their natural habitats – electronics. Doesn’t anyone remember Carol Anne and the television? Spielberg is probably ordering up a new sequel using a touch screen even as I type.

Though, now that I think about it, convincing the spirits that knock around our place to live in one of our cell phones could be a potential winner. If it helps them be less cryptic, I’d be all for it.

One thought on “Communicating with the Dead? Yep, There’s an App.”

Being My Shadow Self for Halloween