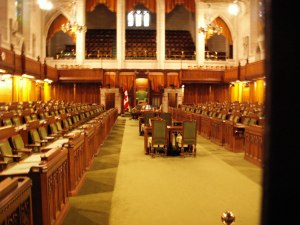 I’ve been keeping an eye on the trial of Senator Mike Duffy, who’s currently on trial for – as far as I can tell – being greedy and stupid.

Duffy was appointed to the Senate (in Canada the Senate is a relatively toothless institution and appointment is based on an antiquated patronage system) by Prime Minister Stephen Harper. Duffy was a journalist who’s been lobbying for a Senate appointment for himself since the Chretien government.

Theoretically Senators comb through legislation passed by the House of Commons to find issues and make improvements before passing it along to the Governor General for Royal Assent, which makes legislation – law. In practice, the final two steps are mostly for show though the Senate has  occasionally done more than rubber stamp things.

Both the Senate and the Governor General are historical left-overs from Canada’s British Empire past that we can’t get rid of because they are embedded in our Constitution, and we can’t open it up to fix that because … reasons.

Anyway, Duffy was accused of charging the taxpayers of Canada with some personal housing expenses that he probably shouldn’t have. It’s unclear if he broke any laws because we’ve since come to find out that there are precise few written rules about what Senators can or can’t “expense” onto the backs of taxpayers.

Regardless, the optics looked bad, and the ethics were questionable, and Duffy was ordered by the Prime Minister to repay the money.

And then it gets interesting.

Duffy didn’t think he should have to repay anything and as the dollar amount grew (eventually landing at $90,000), he got huffy and whiny.

Harper’s Chief of Staff, Nigel Wright, tried to broker a deal where the Conservative party would pay the money for Duffy, and Duffy would claim, publicly, that he paid the money back himself.

Shady, but it gets worse.

As the dollar amount climbed, the party balked, so Wright, a millionaire many times over, simply wrote Duffy a cheque himself, and Duffy pretended that he paid back the money he may or may not have owed in the first place.

And then it gets much worse. Lies were told. Retold. Revised. Re-imagined. Told again.

Cabinet ministers parroted lies in the House of Commons and to the media.

Senators told lies that were written for them by the Prime Minister’s staff and chief aides.

The Prime Minister vouchsafed for them all and when he wasn’t believed, he revised them himself.

Wright either resigned or was fired, depending on whose version of events you want to believe.

As it stands today, a lot of lies and covering up occurred to essentially try to make the Conservative Party of Canada appear to be ethical and upstanding when in fact, they aren’t so much.

At this point only Nigel Wright and Mike Duffy have been punished in any way for what appears to be the work of a half-dozen – probably more – people who are ranking members of the Senate and important advisers in the office of the Prime Minster.

While no one is saying that the Prime Minister knew about the cover up and lies as they were being manufactured, he did clearly know the truth at some point over the two-year saga of the downfall of Mike Duff,y and he did absolutely nothing about it.

Except to lie at worst or condone the lies at the least.

Why does this fascinate me?

Because I remember this morality play from my youth in the United States.

In the summer of 1974 my Dad was riveted by the Watergate Scandal.

He was a fervent Nixon supporter. Voted for the man three times and believed him to be an upstanding guy and a great President.

He was crushed by the revelations that Nixon knew about the Watergate break-in and lied about that knowledge and assisted in the cover-up.

“He should have told the truth from the beginning,” Dad said. “It would have worked out in the end had he done that.”

It didn’t diminish the respect Dad had for Nixon’s accomplishmen,t but it coloured his opinion about political parties and their effect on the people who belong to them and run under their banners.

He never voted for anyone other than an independent again to my knowledge. And he despised Republicans, a party he’d voted for since his first election as a young man in the Navy just after the second world war.

In my mind all the hearings concerning Watergate were closely followed by Nixon’s resignation on August 9th in 1974, but when I googled it, I discovered that the original hearings, and the report that followed, happened in the early summer of 1973.

All of the television networks covered those hearings in May of 1973. An estimated 85% of the American public watched some or all of the hearings.

That I remember. We only had four stations back then. CBS, NBC, ABC and PBS. They all covered them at first, and then they tag teamed to make sure that all the hearings were public and available.

People wonder why it’s so hard to work up the general public about political wrong-doing today, and in my mind, it’s a simple answer.

When I was a child, there was no way to escape unpleasant news. Today there are hundreds of channels plus the Internet. It’s easy to avoid things you don’t want to know about even if you should be paying attention.

I was trying to explain all of this to my husband last night and my daughter today.

I learned from that huge event, which reset many things in American politics, that ideologies were dangerous and usually corrupting. That good people would eventually succumb. That questionable people would become more so. That dogma is closed-minded and will be the downfall of civilization when the historians are finally able to sort through the wreckage.

There were a lot of other things going on in the summers of 1973 and 1974. Oil embargos. Recession. Price controls that lead to shortages. Going without was something that in my memory, I associated with Dad’s union being so often on strike but now realize that there were much larger events in play.

Which brings me back to Mike Duffy, Nigel Wright and Stephen Harper.

There is a federal election called for October 19th. Generally elections here are short – five to six weeks – but the Prime Minister dropped the writ almost two weeks ago.

Speculation was that he wanted to spend the other parties into submission with a long election, and there’s probably something to that.

However, I think he hoped the election would distract people from the Duffy trial, and the revelation that he isn’t the ethical, responsible leader he has always sold himself to be.

He’s hoping that no one will notice, or that we will not remember on October 19th, that he promised to end the very things he allowed his closest aides and advisers to do. To ignore or bend rules. To rewrite them if they had to. To cover up. To lie. To demand that elected MPs support those lies by retelling them in the House of Commons and to the media.

Prime Minister Stephen Harper’s main goal was to remove accountability and tradition moral/ethical guideposts from the Canadian landscape and government system because they got in the way of people making money. And he did this while telling us the exact opposite. That he and his party were responsible, good people rather than the self-interested and short-sighted ones they are being revealed to be.

Nixon’s relativism on ethics and governing allowed Ronald Reagan to happen, and politically it’s been all downhill in America since.

Harper is our Nixon. That he happened because the Liberal Party got too comfortable and causal with power shouldn’t be forgotten, but it’s Harper’s version of conservatism – borrowed from theeven more than ethically challenged America version – that has brought Canada to the top of a hill that it wouldn’t take much for us to start rolling down.

Not a lot of people see this, or agree would entirely agree with my observation if they did, but I believe that as a country we are in a dicey place right now. It could either way.

But I stand by it. If this coming election gives the Conservatives another crack at forming government, and the opposition parties don’t band together to bring it down, Duffy will stand in history as our own Watergate moment in time. I don’t think that’s a milestone we should want for ourselves.

One thought on “Nixon, Harper, Watergate and Mike Duffy”

Shit You are Just Too Old For