I’m sure it’s better to be an only child 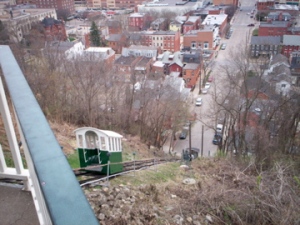 It changes superficially but it’s essence remains unaltered by time. Solid working class semi-ultra Christian river town that forms a Bermuda Triangle of modern culture with its stunted twin city across the Mississippi in Illinois and the small town countryside of Wisconsin to the near northeast.

Technically I’ve spent more of my life living away from the north corner of Iowa than I did being incubated there. I left for college right after high school and moved to Des Moines directly from college. It left its mark nevertheless in the way that everyone’s childhood home does. 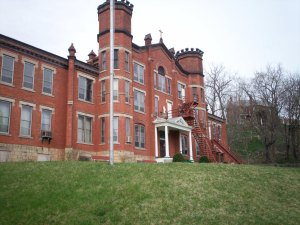 Our Lady of Angels, Dubuque. Today is home to a site of perpetual adoration but was a convent and a the home for unwed mothers that both DNOS and my birth mother stayed in the mid-1960's

When I was growing up, there was no minority population and personally knowing someone outside the Catholic faith wasn’t a common experience. There was one family in our neighborhood who wasn’t Catholic. When their seven-year old daughter was run down by a teen who took his parents car without permission one afternoon shortly before school let out for the summer in 1973, they buried her in Linwood Cemetery which is on the north side overlooking the river. I’d never been inside the gates. It’s where non-Catholics were buried. Not exactly unconsecrated ground but when I afterward pondered the idea of burial there myself (I was always a morbid child), my mother about had a cow.

“We don’t bury our people there,” she said.

N2 and the neighbor boys were having trouble incorporating Dee into their play. She was so looking forward to seeing her cousin, N2, but at eight, and being a boy, there is just enough difference between them now that it takes time for them to adjust to each other when we visit. It would be late Wednesday before they were on mostly the same page, so by supper time, Dee was in tears and lamenting the fact that she has no girl cousins and that Grandma’s neighbors are all boys. Auntie saved the day by sitting on the driveway with her and drawing with chalk while the boys played football the yard over.

As I watched, I could see why Dee was put off. The smallest of them was still an inch or more taller than she is and they outweighed her by anywhere from 12 to 60 pounds. She’d have been a stain on the greening grass.

The weather was stellar before I forget. Freak warm spell with sun and temps approaching 30C. Green of varying hues all around topped with budding flora. First time ever that we’ve traveled in the spring and it’s been beautiful.

And then there were family “issues”.

Lawnmower Man called around the time we were cleaning up from supper. Grilled a smorgasbord. Tasty. Baby had collapsed. Should he take her to the hospital?

“I don’t want her dying here in my house,” he told Mom.

Baby is forty-one. She’s been with Lawnmower Man for the last six years. He’s the father of the first child she had out-of-wedlock when she was a junior in high school. That girl would be twenty-four today and the last photo I saw of her as a six or seven-year old showed a verging on too chubby cherub who looked exactly like her mother.

Mom told Lawnmower Man to take Baby to the ER at the new hospital in the nearest town, but he called back within the half hour to inform us that Baby didn’t want to go despite the fact that she couldn’t move her arms and her hands were numb.

“I can’t afford to go to the hospital,” she wailed.

And she can’t. She works in the laundry at a home in Dubuque that’s run by the state. After seven years and a compressed disc, she earns a whopping $11.86 per hour, works in excess of 35 hours a week but is classified as part-time so they don’t have to give her benefits. No health care for the working poor is the American way.

“Well, you might have nothing serious or you could be dying,” I said. “So, you can stay home and chance it or go to the hospital and find out for sure. You will definitely avoid the dying thing more easily by going to the hospital though.”

I am that helpful.

And I am always fairly heartless. Baby is a drama queen. The last time we’d gotten a call (and I was home visiting then too – Baby ALWAYS has some crisis or other when I am home or for some reason the focus is on me) it was Lawnmower Man. He had collapsed in their kitchen and couldn’t get up.

“I think he’s having a stroke,” Baby said at the time.

An hour goes by and Mom is teetering. In situations like this, she can’t decide whether to worry or fume, so she alternates. Meanwhile I’d brought Rob up to speed.

“This is why I don’t like wasting vacation on family,” was all he said.

Okay, that wasn’t all. To quickly paraphrase, he reminded me that my youngest sibling never missed an opportunity to steal my thunder whether I was just visiting, getting married (both times), having a baby or being widowed. Baby has to be the center of attention. No one puts her in a corner, I believe is how it goes.

Phone rings and no one makes a move. I have become the official go to once again.

“Well,” Lawnmower Man says, “She might have had a stroke.”

I should have known once the word “stroke” was uttered that I was about to lose a precious chunk of holiday, but I wasn’t so callous as to think that yet.

“She’s having more tests,” he continued. “I’ll call when we know more.”

“Do you want someone to come up?” I asked, not eagerly but I thought the gesture was necessary.

“What did he say?” Mom pounced.

I told her and she got on the phone, calling him and informing him that DNOS and I would be coming up.

“Was that ever a question?” I asked.

DNOS and I left for the hospital. It’s about 40 minutes from Mom’s house in Dubuque to the tiny college town in Wisconsin that is nearby Baby’s home. I left my silent and resigned but eternally patient husband with two kids to watch and my borderline hysterical mother to deal with.

“Next time I get married, I am screening the in-laws ahead of time,” he said.

On the way to the hospital DNOS, who is an oncology med tech at one of the Dubuque clinics, made a few calls, scouting the situation and seeing where she might pull strings. If Baby had had a stroke, Mom wanted her moved to the city.

“Yeah,” she informed her boss as we drove, “my little sister might have had a stroke and we’re heading up to P-ville to see. Can we move her to Mercy? Do they take indigent? Okay, good. No, I was watching Dancing with the Stars tonight. It’s first round. Are you watching Lost? I wanted my aunt to watch it for me, but she’s never seen it and wouldn’t know what is going on. Really? No, that Kate-bitch will probably stay because Buzz Aldrin was just terrible.”

Baby was alone in the ER. Lawnmower Man had left when he learned we were on our way. One of us alone is enough to make the man shit himself, no way he could face us both down as he recently gave Baby a blackened face from upper cheek bone to jaw. Not that we would hurt him – physically.

“You know,” I told DNOS on the drive, “if Dad had just told CB ‘yes’ all those years ago, it would have saved us a trip tonight.”

Lawnmower Man is my age which makes him five years older than Baby. She was sixteen when he knocked her up. We should have known he was bad news when our lovable dog nearly took his left leg off with one swipe the first time he came by the house to pick Baby up.

Naturally he took off for pregnant underage girlfriendless parts once the news of his impending fatherhood was revealed. About a year after Sarah was born, CB ran across Lawnmower Man out in the Bay area of California. CB and a few Mexicans he’d met during a month long incarceration were hanging out in a bar when he spotted Lawnmower Man, who had spotted CB too and was rightly concerned for his well-being.

CB explained the situation to his amigos who offered, as prison buddies are wont to do, to correct Lawnmower Man – kinda permanently and with no small amount of prejudice. CB called Dad. Dad asked CB to let it alone. Dad was a good Catholic.

And many years later, we are still paying for letting a good opportunity slide by.

It took about 15 minutes or less for DNOS and I to ascertain that whatever had happened, Baby was not stroking out. She was having a panic attack and thank god for Ativan is all I can say.

All told, we languished for another hour plus waiting for the doctor to finish expending valuable time and resources on a non-issue before Baby was released to our care with a lecture on healthy living and script for Vicodin that we had no intention of filling for her.

At one point a nurse approached DNOS and said,

“Your sister,” she began and hesitated. DNOS, knowing exactly where she was going waited patiently. “She’s slow, isn’t she?”

And there is the inescapable bottom line where our little sister is concerned and why none of us can just write her off as a dumb-ass with issues.

It was nearly midnight when we got Baby back to Mom’s and put her whiny ass to bed with ice packs and otc migraine meds. Our shopping trip for the next day was scrubbed. Baby would have to be coerced out of bed and somehow carted home – I got stuck with that and it’s another long story for another day. Short version, Baby tried like hell to pick a fight with me to the point where she even said,

“Your husband hasn’t said a word to me. He doesn’t even care that I am sick!!”

Which I couldn’t have argued with if I wanted to, so I changed the subject.

Mom worried that Rob would never want to visit again, but I pointed out this wasn’t even the biggest blow-up he’d witnessed and that I didn’t have anything to do with his sisters either.

“Besides,” I said, “he’s taking me to a family reunion this summer that will be more than payback.”

Not that it’s a quid pro quo. Rob’s in-laws are nice people. The only thing is that where my family adores Rob, his late wife’s family is only nice to me, which is neither good nor bad. I am a constant reminder of a reality they prefer not to deal with and have the luxury of not dealing with most of the time.

That evening Rob, DNOS, BIL and I sat around on their deck while Mom babysat the kids at her house and we swapped dysfunctional family tales. It’s all good in the end, but Baby and Lawnmower Man have had their stroke apiece now and I, for one, am not running to their aid again.