If I were going to write a memoir, that’s what I’d call it and then subtitle it with – Lather, Rinse and Repeat. 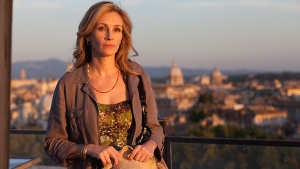 I bring this up for two reasons.

The first is that my blog reader is crammed with Eat, Pray, Love crap as the Julia Roberts adaptation of Elizabeth Gilbert’s book is opening or has opened.

The reviews are mostly “meh”. No surprise. The novel itself isn’t much. One review pronounced it too “talk-y” as in the character constantly describes how she feels and her observations about every freaking thing. As if a movie about a writer documenting her journey to enlightenment should be somehow more visual than word-packed.

My favorite review so far was written by Helena Andrews at The Root. It took up the theme of Gilbert’s book and named it “white girl problems”. Couldn’t have found a better genre for it.

White girl problems are essentially the non-issues the pale and the privileged focus on in the absence of actual adversity.

When I attempted to read Eat, Pray, Love, Will was just going into hospice. A book by a woman bemoaning her serial monogamy – that horrid pretty girl issue of having always been someone’s girlfriend or wife – while I was losing the only man I’d ever had a long-term relationship with in my entire 41 years didn’t go over well.

Sucks to be her, I mentally eye-rolled as I put the book on a shelf never to be cracked open again until I decided that some of her syrupy half-wit might be useful when I was writing comps for my education masters about six months later. I knew Gilbert was a poser but my professor didn’t.

Andrews though draws this awesome comparison between “white girl problems” lit/memoirs and a line from Tim Burton’s Alice in Wonderland. There is a scene where the Mad Hatter observes that in the real world, Alice has lost her “muchness”.

“You were much more … muchier.”

White girls in the real world then are searching for their muchness.

Gilbert’s muchness turned out to be the exact thing she thought was her problem – love and being in a relationship – because her journey ends when she meets the man she is now married to.

So much for issues.

Which brings me to my second reason, and it is related to the loss of muchness. My memoir. The one that’s pretty much written and is screaming to be edited and shopped.

I know. I have been saying that for a while now, but I am sure of the reason behind my reluctance. And it goes beyond my belief that books about overcoming tragedy by being plucky, witty and boot-strappy are so common place that they’ve become clichés onto themselves.

Rob followed a link to a widow blog and the author was describing her experiences at a Blogher style convention for widows complete with keynote speakers, author panels and how-to workshops. A couple of her encounters with people who’d mined literature from their experiences and turned them into books and/or workshops had left her feeling removed and as though she was possibly doing widowhood and grieving wrong.

And then I knew why I haven’t finished my memoir.

I can’t give people their muchness back. I could write a memoir, package it and sell it out of workshops and conventions, but a person’s muchness comes from within not from without.

I felt/still feel sometimes as though I didn’t do widowhood right. The way I felt, and the things I needed to do for myself, were often so out of step with other widows, books on grieving and even memoirs of widows that I wondered how I could be so far out in the weeds when everyone else seemed to know where the paved road was.

I can’t do that to someone else. Lead them to believe – even inadvertently – that I know the way.

Especially since I really don’t believe there is a process to grief or a one size fits all way to navigate the first year or that the whole honoring of someone’s memory should even be numbered in the top twenty of a person’s priority list.

The blogger mentioned how pleased some of the authors seemed with themselves, their lives and this opportunity to basically headline a conference. And I can totally understand her and them.

It’s amazing when people read what you’ve written and tell you it meant something to them. It would be easy to let that dominate and forget that the subject matter makes you more responsible to your readers than that of a fiction writer.

If what I write inspires someone, wow, but if it makes someone feel inadequate, wrong, or persecuted by the fates? Ouch. It would bother me the same way that the kid in my 3rd hour English class who’d given up because he’d never gotten a grade above a D used to bother me. Even though that wasn’t really my fault, I had to fix it. It was my job.

Memoirists open their lives for reasons that are far different from that of a fiction writer. It’s more than telling a good story. My story and opinions as a blueprint for grieving would be a responsibility like the one I took on as a teacher. And it would mean never fully closing the door. The pain would always have access of sorts to my now. A liberty that it doesn’t deserve and that I don’t owe it.

Besides, I’ve written my story – here and in a hundred different places all over the webosphere via comments and guest posts.

Purge, Pack and Move would be an awesome title though.  Sigh.

I have a basically unread copy of Eat, Pray, Love that I will likely never read at this point especially now that there is a movie version. Reading a book that you can watch is just very not done in my homeland. Americans are practical in their quest of the lowest road that will not make them appear too lazy or uneducated.

I am probably one of only a handful of women in the western world who hasn’t read more than the chapter excerpt of Eat, Pray, Love which appeared in Oprah magazine sometime in early 2006. I bought the book because I wanted to use the O magazine version as a reference on my comps. We had to write a bibliography of all the books or magazine articles we quoted, or that influenced ,the gazillion mini-thesis papers that made up the examination at the end of the masters program I was just finishing in the spring of 2006. Unfortunately, I had reached my limit on the number of magazines I could use and needed books. So I just figured since I liked the chapter, perhaps I could claim to have read the whole book and then do so after the fact, in case I got quizzed on it during our Masters week in July.

As a matter of fact, or point of reference, take your pick, I was working on those comps exactly four years ago. Or I was trying to. My father was having surgery and Mom was freaking out. He had a growth that needed removing that could have been cancer but the doctor didn’t think it was overly likely. I was prevailed upon to come home for Spring Break and … step up? … despite the fact that I had a thesis paper to finish and comps to take.

Big memory of that week, being annoyed that I was stuck taking care of kids, sitting at the hospital with Dad and generally being expected to be strong and serene while Mom and DNOS went about their normal routines for the most part. It was like they didn’t notice that I had really important agenda items on my plate that I couldn’t delegate. Sigh, always the delegatee back then

I’d heard about this movie. Investigated the author and novel’s premise a bit more. Decided she was a poser and dismissed it all as self-help garbage.

“Why do people need to travel to exotic locales to find themselves?” I asked Rob on our most recent lunch date. “Your self is inside of you. There is no need to go looking.”

“Well,” he said, ” I’m a little hurt by that statement because it’s kind of what I did after Shelley died and I took my trip down south to revisit places we’d been together and see people we knew.”

Which, to my mind, made what he did different from what Eating Author did. She was running away in hopes that the bad stuff about herself would be sloughed off as she discovered new things or cultivated new things or something like that. Rob was reconnecting with memories – the good ones that get lost sometimes after your spouse dies.

I remember at the time I read that single chapter thinking “wouldn’t it be nice to have such simple problems and be able to shed a whole existence and start fresh with someone else bankrolling you?”   That just wasn’t my reality and never had been. When life needed overhauling, I had to stick around and do it and pay for it myself.

However, in a way, coming to Canada has been my mini-Eat, Pray, Love – minus the pray part or Yoda or getting to hang in India.  Canada? Not India. I have put on weight though. Perhaps I am like Eating more than I care to acknowledge?

Since Rob would rather sledgehammer a toe than go to a theatre to see a chick flick with delusions of enlightenment no less, I will likely only see this if the universe nudges me to pick it up at the bookmobile but since the book hasn’t moved me to crack its spine in fours years, I doubt it.