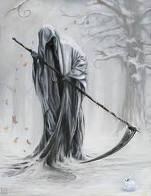 2017 arrived on a sleigh of smoking turds pulled by the four horseman of biblical fame, and still, we made it to 2018. Don’t ask me how. Last year was a blur. The world reeled, staggering from one shallow foxhole to the next with the various status quo in flames all around.

It reminded me of my favorite scene from that stink bomb of a psycho-drama The Birds.

Crows have just attacked the school, and the adults are huddled in a bar (kinda fitting) discussing a complete and terrifying turn of the table by Mother Nature (well played by the way) as though there was something rational to be found, if they just used their indoor voices, with town drunk – the only rational voice in the room – punctuating the discussion with occasional “It’s the end of the world”.

Is it though? Really? The end of the world.

Probably more reasonable to take our cultural reference cue from REM. It’s the end of the world … as we know it.

Because that happens throughout history, and if we are really ready to be honest, it’s happened more than once in living memory.

Someone on Twitter today had a list of all things that didn’t exist in 2003. On that list was pretty much the entirety of the internet as we use it today. Certainly most of our communication devices. The way we interact socially has been completely altered by social media.

Generation Zed knows nothing about an existence before hand held devices. They’ve literally been born and grown along with them. Our world is basically a teenager entering the end stages of puberty. And that, explains a lot.

So it makes sense that a political and economic world that our great-grandparents would still recognize and feel comfortable with simply can’t adapt. Things are giving way. It’s not like there are other options.

And okay, I will grant that the nuclear code rattling by America and North Korea could maybe sort of bring about an Armageddonish crisis, but I am going to throw caution to the wind and bet on us still being here in a year. What I will not claim is that the world will have settled down much. The current version of Rome wasn’t built in a day, and it won’t transform itself in a couple of years anymore than the last Rome did. Change takes time even when it feels like the exact opposite.

Happy New Year then. Congratulate yourself if you aren’t a Nazi or one of their enablers, yet, and remind yourself that whatever is coming, you are not the only one going through it. Look around your neighborhood, workplace, gym, school, community and find those like-minded, who are out there, and connect a bit more than you currently are. There is safety in numbers, but also laughs, joys and fiendish plots to thwart those bags of dicks who thrive in the chaos of change.

The end of December and the first week of January are marked by review lists in the blogosphere. Normally these lists are confined to the previous months, but as most people believe we are beginning a new decade (we aren’t – technically the new decade begins in 2011), there are decade reviews as well.

As I struggle to get back into the personal blogging habit, I am tempted to phone it in with lists of my own. They are easy to write and easier to skim. I’ve blogged and readers scan. Win and win. But I am struggling with the concept because most lists of this nature are pretty darn vacuous. Movies. Television shows. Celebu-moments. The stuff of which People magazine and USA Today is made and that, in my opinion, is best confined to the periodical racks at grocery check-outs. But, it’s what people like to read. My dilemma as a blogger has always been writing about what I find interesting and what I know people in general find interesting.

People who end up at my blog accidentally find the following of extremely urgent interest:

2) Hairlessness. And you really don’t want a list of these search parameters, trust me.

3) Angelina’s emaciation skinny scary thin svelte secrets. And I can answer that: she doesn’t eat. Any time in my life I have been thin like that, it’s because I wasn’t eating. Bony-thin is not magic. It’s anorexic-like will power.

4) Middle-aged sex. Which just makes me scratch my head.

5) Widowed people falling in love or remarrying or re-coupling or dating or just thinking about dating.  As if somehow it’s different from divorced people or people who’ve never been married.

But I have been over them all at some point in the last 3 and 1/2 years.

The trouble with pop culture lists is that I don’t participate much in popular culture. Monk ended this year and not only would I not have known that if I didn’t have a Twitter stream, but I’ve never watched the show at all. A widower whose life is controlled by his grief as entertainment? I never got that. So I never watched. But I also can’t tell you much about what is good or bad (although apparently the Charlie Sheen sitcom, Two and a Half Men is atrocious to the point that watching your toe fungus grow is more entertaining).

I saw like two movies in a theatre this year. To my credit I do listen to the current pop/rock, but beyond succumbing to a tune or two by the earworms known as Taylor Swift and Nickelback, I don’t purchase music.

Although Eminem and Nickelback were named artist and group of the decade respectively, I have no idea who their competition was and I am surprised by the first choice because Slim Shady has been mostly absent for the last part of the “decade”. But if this was a vote or a critical acclamation (given the recipients I highly doubt the latter), I have no idea.

Shoes? I have heard that people are shunning Crocs but have no idea in whose favor.

Cars? It wouldn’t be an American brand, that’s for sure.

Mommy bloggers? I know this one. It’s The Pioneer Woman. I checked her blog out and if that’s pioneer life, we should all be living so rustically. Still, she has a slick-looking layout – the kind I am technically and pretty much uninterested in doing myself. I noticed that one of the things she is known for is the “harlequinesque chapterization of her love story with her husband”. I checked that out too and discovered I’d been there and done it, so I didn’t bother reading more than the last chapter. She represents my dilemma as a blogger in that 1) I can’t go full uterus and 2) I detest the idea of shilling/pimping promoting the American consumer lifestyle as realized by the privileged average mom.

I can’t do celebrity because I am completely out of touch with who is currently reigning. Okay, I do glance at the covers of the main rags at the grocery, but I don’t recognize anyone but Jennifer, Angelina* and Brad (who between the eye job and the grizzle is looking old), and this dates me something fierce.

I don’t read from the bestseller list in real-time because I don’t buy books much anymore and the wait time from the library is intense.

My dvd viewing is feast or famine and usually titles so old that I can’t believe I missed them the first time. Case in point: The Big Chill. Rob and I watched it recently and it has not weathered well. Aside from Kevin Kline, Meg Tilly and William Hurt, the performances are so-so and it totally reaffirmed my distaste for Boomers as a generation. I am a year and change too old to be technically considered Gen-X, but I cannot identify at all with my supposed generation.

There is always politics. A lot happened, as it always does, and a lot didn’t, which was no surprise. I expend my political outrage on Facebook these days which explains the fact that I am unfriended and/or ignored a lot. Social media is about as social for me as real life has always been.

Despite the above, I will endeavor to ten in my own fashion for the next few days. I have a post on personal resolutions of sorts in the works and I am going to take a single page from Pioneer Woman and create a page with all the links to posts about Rob and I and our, decidedly, non-rom/com romance. My gorge rises at the mere idea that we were in any way Harlequin, so you would be wise not to make the comparison should you choose to comment. However, doing this will no doubt delight the searchers who come here looking for a how to information on finding love and marriage again after widowhood.

Happy January 2010. A new “decade” is hopeful in the bright shiny way of all things yet to be realized.

*That child’s bony arms scare me more than Madonna’s gristle and bone forearms.