Sarah Palin committed a bush in a recent Twitter battle cry to New Yorkers calling them to “refudiate” plans to build a mosque close to the 9/11 site.

“Refudiate” is, of course, not a real word in the same that “normalcy” was not a real word until President Warren G. Harding coined it a hundred years ago – give or take.

The offense against the American version of the English language was quickly seized upon by those who (quite rightly) fear Palin and held it up as proof of her already rather obvious lack of dexterity with a language we can only assume she’s been speaking since toddlerhood.

Although malapropisms out of the mouths of political leaders actual and wanna be are disheartening, out of the mouth of Palin, it’s not worth a footnote much less a bloggy storm. 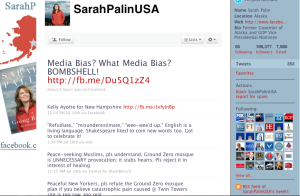 What’s really eye-opening came on the heels of Mama Sarah’s predictable inability to be chagrined.

“Shakespeare liked to coin words too.” she twittered back at the elitist blogosphere.

And indeed he did.

All that glitters is not gold. As (good) luck would have it. Household words. Cold comfort. In a pickle. Devil incarnate. Eaten me out of house and home. For goodness sake. Give the devil his due. Heart of gold. Laughing stock. It was Greek to me. Naked truth. Wild goose chase.

What amazes me and seems to have sailed past everyone’s offended ears is that Sarah Palin knows that Shakespeare coined words and phrases that previously didn’t exist in the English language.

And I will concede that it’s very possible that her little Twuip was as ghostwritten as her book, but it was clever, and it’s past time her critics realized that she cannot be mocked and jeered away.

First, because Palin doesn’t blush unless it will serve a greater purpose.

Second, she has a gift for turning faux pas into the “aw shucks, I’m just folk like you ordinary people”. She spins her legend from the ridicule and frustrated rants of the left and the few on the right who see the damage she is doing to their politics – such as they are.

Refudiate? I think ole Will could have done better. The things that man could have done with a Twitter stream should leaving us weeping over the drivel that reigns as literary there now.

It’s not the worst thing she’s uttered in any medium, but it’s important to remember that she can’t be taken down by trivial nit-picking. She feeds on that like Nosferatu on village virgins.

Substance, people. She doesn’t have any. Criticism of her should.

is today. Or so Facebook and The Bloggess tell me. And that alone makes it true.

I’m not so sure the advent of Social Media as a primary venue for human interaction is something to get all “rah-rah” about. After all, it can only lead to this in the end:

If it hasn’t already for some of us.

Not knocking the brave new world. I met my husband on the Internet, as some of you know, and many good friends exist only across time and space with the help of powerful satellites and Al Gore.

Just a caution I’m throwing out.

So, happy social media day. IM or text your favorite virtual friend. Tweet goodwill to all and update that neglected status bar for the hundreds and hundreds of people you’ll never meet.

But consider taking a walk and doing some Sun Salutations while you’re at it.

And where were you? Certainly not glued to cable news or Tweeting/retweeting links to organizations looking for donations to aid the Haitians now that an earthquake has heaped insult on the misery of their lives.

In spite of his idiocy, the most soulless Rev. Pat Robertson, a great number of Americans will watch the drama du jour in Port-au-Prince via Fox News, or whatever channel their political ideology requires they watch, feel terrible. Because even if they are unemployed and technically squatting in their yet to be foreclosed homes, they have a sense of “there but for the grace of God, go I” and “at least I am being allowed to squat in comfort, because my bank is too afraid of economic collapse to evict me, and not living in a shanty shack on a mud hill”. Except for those things, they will be could be one of those poor wretches someday.

And they could. Remember Katrina? The Superdome? Thousands of soon to be abandoned strip malls have the names of the homeless of tomorrow written all over their walls.

So the privileged (like Will and Jada Smith who are bravely auctioning off some personal art) and the not so much anymore (who never owned art anyway)  will dig not too deep really or deeper than they probably should to send money via the growing number of aid efforts to line the pockets of the incredibly corrupt Haitian government, who might let a bit of this lottery booty trickle down á la Reaganomics to the crushed and dying in the mud-they-used-to-eat Haitian earthquake victims.

And I know how cynical I sound.

But Haiti was a hell-hole where people were so hungry they ate mud. The hills around Port-au-Prince were stripped to build shanty towns which promoted a topsoil erosion that literally has left a brown ring around the island that probably shows up on Google Earth. The government is corrupt and lest we forget, the Haitians are the ones piling into leaky boats and making the dangerous trek for the U.S. coastline back in the 90’s.

If there’d been no earthquake the other day, Haitians would be filling the empty tummies of their toddlers with mud today while Americans got fatter on fast food all the while totally oblivious to the Haitian plight.

And I am not against helping out a neighboring country in its time of need. We should do all that we can. My late father, for example, sent money every year to a Catholic church in Haiti and left instructions in his will for a final donation from his estate. Haitians deserved help before despite Pat Robertson’s misinformation about them having made a pact with the devil* and if they’d just embrace Christianity they could be as enslaved to tourism as their Dominican Republic neighbors.

I just find it sad, and telling, that we can ignore suffering that isn’t catastrophe based. Americans do love their drama. And a good disaster is better than watching the first rounds of American Idol, which I am assured are too boring to bother with.

This is sweeping generalization, of course. Like my father, there are people who care enough to help even when the in crowd isn’t paying attention.

*Which is Assembly of God-speak for being Catholic as 80% of Haitians are.