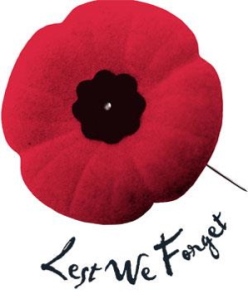 Until 9/11 the day known as Veteran’s Day in the United States, where I was born and raised, was just a day. Nothing particularly elaborate or widespread.

You knew it was a federal holiday by the absence of mail and the dutiful coverage by the media of ceremonies here and there.

But really, it was not a big deal.

The attack on the Twin Towers in NYC changed that a little bit but it was still hit and miss regardless of the impression given by the media down there.

When I came to Canada, I discovered the true origins of this day*, and the fact that in some countries around the world – Canada being one of them – Remembrance Day’s meaning is kinda like the Grinch’s observation about Christmas – “maybe, perhaps, means a little bit more”.

Life doesn’t come to a complete stop for Remembrance Day in Canada. In fact, it’s not even a statutory federal holiday. But it’s important.

Not because – as some people (politicians especially) would like us to believe – the fallen soldiers of our too numerous wars died defending “freedom”.

They fail to negotiate, compromise and find equitable resolutions to vexing problems. They fail to think in terms of years and decades out as opposed to between now and the next election. They fail to understand that war’s human cost is seldom worth whatever short-term solution was gained. And finally, they fail to do what they were actually elected to do, safe-guard our freedoms themselves through their words and deeds.

Every time a soldier dies, somewhere a politician’s karma gets deservedly more muddy.

Remembrance Day is important because we remember how awful war is by recalling the bright futures that never were. The young men and women who didn’t come home to family and friends. The waste. The horror. The destruction. The fact that freedom wasn’t democratically defended and promoted but was used like a blunt instrument on the landscape, lives, hopes and dreams of people we don’t know. Whose strangeness to us made it “okay” to destroy their homes and kill their children.

And we should remember these things. It’s a painful and humbling reminder that we haven’t got it all figured out. That we are works in progress, and at times, our progress hasn’t been for the greater good but for greed, power and the right of the conqueror to force his will on the unwilling.

My father and my uncles fought in World War II and in Korea. It changed them, or so I am told. I only knew the men forged by war not the men they were prior to war. I recognize what a great loss that was to me and for them.

I wear my poppy in the weeks leading up to Remembrance Day like many, many others. I observe the day as do most of the people I know.

*It’s amazing what you can learn about history when you leave the United States, where history is told in a way that is good for Americans and shorter on fact than a Texas social studies curriculum guide. 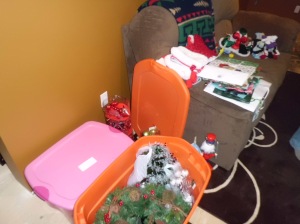 Canadians observe Boxing Day, which is a pseudo-holiday the day after Christmas. Tradition-wise, it sprang from the custom wealthy Brits had of bestowing boxed gifts on their servants the day after Christmas. Nowadays it is a bank holiday and in Canada, it’s taken on the added burden of being our version of the American “Black Friday” consuming fest.

For us, Boxing Day consists of sleeping late, lounging in robes and pj’s for the bulk of the remaining day and in general, being lazy sacks.

We exceeded even our lax expectations yesterday. Neither Rob nor I crawled out of bed until the latter half of the morning. Dee was near to famished by the time I got up and found that she’d run her new iPod to fumes and was back to playing with gift bags and boxes in the living room. Although she is perfectly capable of preparing a simple breakfast for herself, she had her eye on the left-over blueberry pancakes and egg, bacon and hashbrown casserole from the day before and she isn’t allowed – yet – to use the microwave.

The day was leisurely in pace and devoid of productivity save the relentless deconstruction of Christmas displays in the house.

Boxing Day marks the end of the Christmas season in our home. The tree, window decor and outdoor holiday decorations came down late in the afternoon after Rob and I found enough inner initiative to get dressed and cracking.

It’s not just a practical thing. The tree was near to kindling even with regular watering and so a hazard. It also becomes a bit of a nuisance, encouraging gifts to loiter about rather than find new homes in drawers or on shelves. Unless one has a compelling religious reason for keeping it up, or other holiday gatherings in the offing, a tree after Christmas Day takes on the aura of a ripe house guest or a tarrying relation.

So the house was swept clean of Christmas but for the gingerbread houses and the compost awaits them. Gifts have, mostly, found their places. With a soccer tournament looming this week, it’s better to have the more onerous clean up tasks completed so that we can devote proper attention to the serious lounging of the New Year’s weekend ahead.

It doesn’t feel like winter yet. Just five days past Solstice and it seems oddly spring like, an illusion of course but I will take it.

My only concession to the Boxing Day gorge took the form of setting up my new eReader and downloading books with the assistance of a gift card. The reader’s a gift from the older girls and the card was from Rob, who knew what they were up to.

I’ve resisted readers for a while, but I’m converted now and currently immersed in Game of Thrones. My only lament is that I can’t easily skip about and read the ending chapters without screwing up the bookmarking. A small thing in comparison to the ease and loss of clutter.

The day ended with Dee’s soccer tournament in the city. Not a big fan of children’s hobbies that require more of the parents than the children in terms of effort, but less of a fan of the inane notion that children benefit from empty praise, which is handed out to Dee and her teammates in abundance. They blew a lead at the half – that they frankly didn’t deserve given the mediocre effort – and simply didn’t show up in the second half after the opposing team managed to score on them.

They are a tiny bunch. Only a few of the girls have height and only one of them has any bulk, so many of them still struggle with the physicality and the size intimidation thing. But nearly half of them are also still terrified of the ball itself, cringing away from it whenever it flies at or even by them, and only about four of them have a kick that would scare a cat. The rest toe kick like …. well …. like girls, and I mean that in the derogatory sense.

I like the coach personally. She knows the game and it’s good for girls to have girl coaches, but she is forever praising them when they don’t deserve it. One of the reasons, in my opinion, that boys progress so much faster in sports is that their male coaches tell them when they’ve played poorly, explaining exactly what they didn’t do and then practicing the crap out of them on those very skills at the next practice. I coached for years and I taught for years more, and empty praise is one of the worst motivators. Smart kids see through it and are resentful and slower kids end up frustrated and resentful.

That aside, Boxing Day 2011 was a good one. Hope yours was as well.

Once upon a time, I was like most Americans in believing that Canadians were whiter, more northern and slightly more redneck versions of us. All I officially learned in school was that we fought Canada, indirectly, in the War of 1812, which my history teachers seemed to think we won although ask a Canadian and he/she will gleefully regale you with the bum kicking they gave us.  Everything else I knew, I learned from Bob and Doug McKenzie.

“Did you even know what a toque was?” Rob asked.

“No,” I said, “and I didn’t know what back bacon was either.  I thought it might be bacon from the back of the pig somewhere and, therefore, not really all that desirable a foodstuff.”

“Americans call it ‘Canadian’ bacon,” he says that with the disdain he reserves for the habit my countrymen have of laying broad claim to the term “American”.

When I was in high school, some of my classmates fixated a bit on Bob and Doug and the whole “Great White North” thing, peppering their speech with “take off”, “hoser”, “g’day” and “eh”.  I found the whole thing only mildly amusing because the parody seemed a bit far-fetched in an “Ernest Goes to Quebec” sort of way, and not really in keeping with the only other bit of Canadian culture knowledge I had, which was a book I read as a grade schooler that was set in Toronto. The author, it turns out, is a well-known Canadian writer and as a 9-year-old, I found her description of the city on the lake compelling enough to make me want to go there someday, which is something I’ve still not done.

“Do you know what a two-four is?” Rob asked me.

One of the lines in the song refers to a 6 packs of two-four.  Like most non-Ontarians, I had no idea.

“Well,” because now I was confused, “you were only 15 when you left Ontario. What would you know about a two-four?”

Chagrined, he admitted that perhaps his personal knowledge dated back a bit earlier than most.

It’s funny to me that Canadian English can vary as much as it does. At the grocery earlier this week, I was in the butter and cheese aisle where you can also find bacon and breakfast sausage and in less than five minutes no fewer than 3 different women queried the woman stocking the shelves as to the location of back bacon.

My most recent run in with language peculiarities was actually on Facebook. My friend Jade updated her status with a request for the number of a good plumber. When asked why she needed one, she replied that her garborator had vomited all over her basement. When I told Rob that she was having issues with something called a “garborator”, he replied,

“Well you had one of those in your old house.”

“Sure, in the kitchen sink. You scraped food into it to be chopped before rinsing it away.”

“You mean a garbage disposal?”

“Yeah, a garborator. You call them garbage disposals?”

“Uh huh because if you look at the name written on it,” I explained, “that’s what it says.”

You say garborator; I say garbage disposal. You say toque; I say winter hat. You say back bacon: well, okay, so do I … now. But we all still, mostly, say “Merry Christmas” unless we are really Brit-fluenced and then we say “Happy Christmas”.

So  merry eve and tomorrow morn to all and to all a good day.