The public radio, Studio 360, gave a recent audience one of those fill in the blank cards asking them what they thought they might be in their next life. 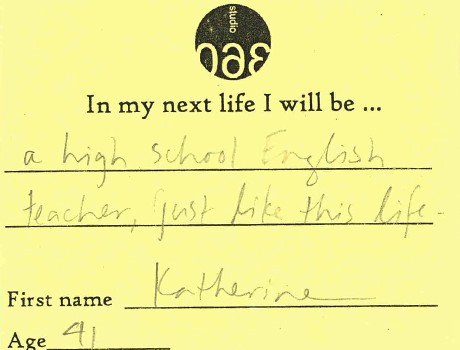 Katherine’s answer isn’t lofty or ambitious. In fact some might say she lacks vision or is afraid to reach for her potential, but I thought it was very yoga and almost enlightened . After all, how many of us are aware enough of our true selves to know when we might have already “arrived”?

Rob and I were watching another episode of the unlamented mid-90’s Marines in space fare, Space: Above and Beyond.

“It’s not as even as borderline watchable as I remember it,” he remarked back when we were barely two episodes in. But with just a half-dozen or so painfully acted installments to go, we are committed.  Or should be.

The recent ones have been character development with each of the show’s primaries taking a turn. Last night’s belonged to McQueen, an artificially gestated human who is the commanding officer to a group of Marine pilots/expendable ground grunts. His dilemma? “Who am I?”

He had determined that he existed for a reason and if he paid attention that reason would reveal itself and he could – in essence – fulfill his destiny.

As it turned out, his existence was narrowly focused but very important to the survival of Earth. And really not all that important for me to go into because the bottom line is that McQueen knew who he was in this life. The one he was living. He was not waiting for a do-over. He didn’t believe in that in any case.

Katherine, the English teacher, knows who she is present and future and I am betting past as well.

In my next life, I hope I will just “be”. The “doing” is immaterial. But I am not certain I am that enlightened yet.

Four Years And the Purging Continues